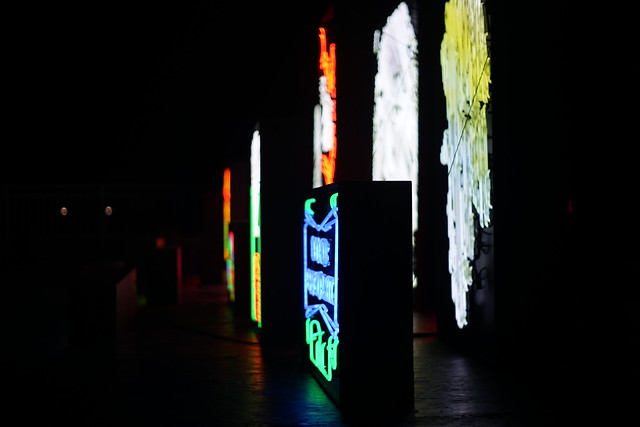 Generally when the top of my pier is transformed into something, it’s either some sort of private party for luxury brands or a showroom for development projects. This time around for art week, my pier was transformed into an exhibit by Portuguese artist Alexandre Farto aka “Vhils”. His techniques range from screen-printing, metal etching and super high frame rate videography.

I only realized that the exhibit was right under my nose when a former colleague tagged this neon sign installation posted this.

After climbing two flights of stairs to reach the roof of the pier (whose upper floors I never had the chance to enter despite commuting through every day for the last six years), you will enter a tent-like temporary structure and start with portraits made of columns of styrofoams. It’s unmistakably the artist’ style: the edges, the hybridity, the verticals.

The spine of the exhibit is a super slow-mo video taken on the streets of Hong Kong playing on long horizontal screens, which might be around Tsim Sha Tsui, the Star Ferry and Nathan Road, with a mesmerizing soundtrack of beeps and bops from the city and/or your Facebook webapp. Who knew you could either make lights flicker in post-prod or that they just flicker on their own when in filmed at a very high rate?

Some of the art used found materials in Hong Kong, like doors that the artist etched faces on, or paper advertising posters that he would stick together and carve into so to reveal faces.

The exhibit “DEBRIS” runs until tomorrow, April 4 at 8pm.