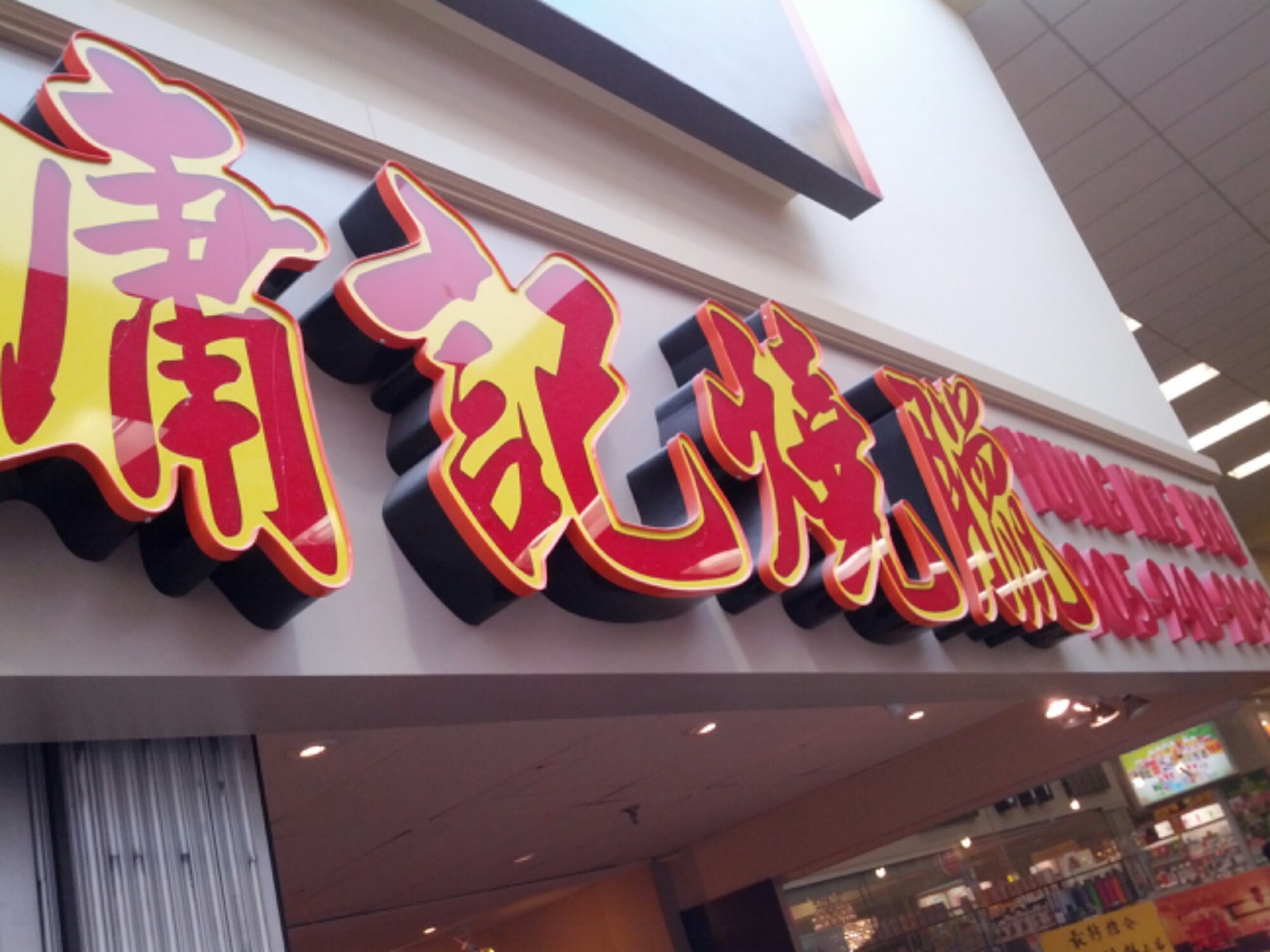 When I come to Toronto with my parents, we will inevitably do a trunkload full of Chinese food that you can’t find in Montreal. It’s less and less the case nowadays, with places like Kim Phat and others like C & T in Ville Saint-Laurent, that opened while this blog was busy living in Hong Kong. There are however still some items that you wouldn’t be able to find at the same level of freshness or quantity of production or year round availability.

One of those things is the Hong Kong-style cured meats. We went to Yung Kee BBQ (Market Village, Unit A10) to grab some of those. The shop sells the regular siu mei, but also had the regular kinds of cured meats that are typical in Hong Kong. In Montreal, as far as I know, you can only purchase them vacuum-sealed in Chinese grocery stores. Not that having them exposed in ambient air is a sign that it is fresher, more “home-made”. 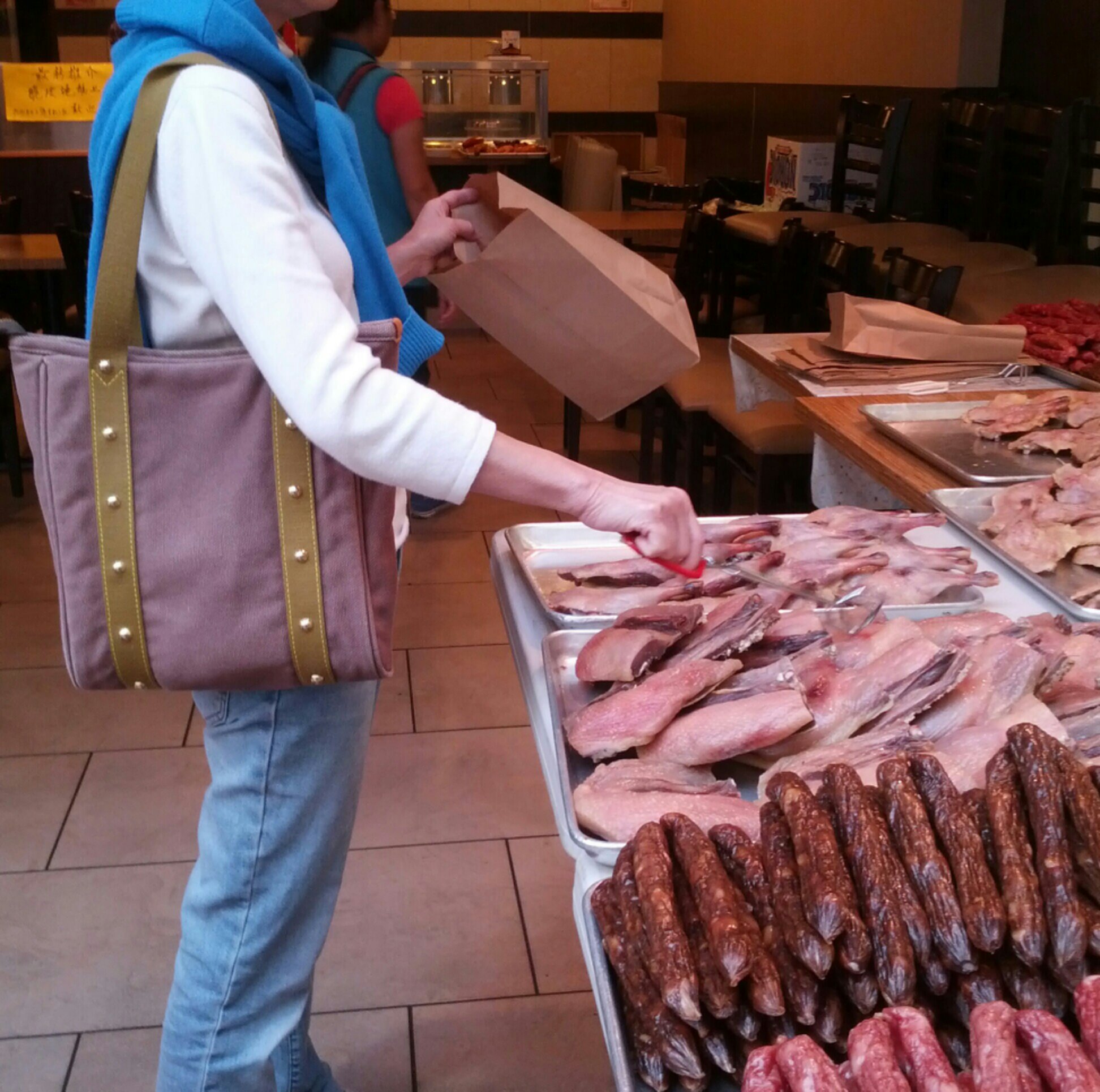 My mom, browsing the meats

When we were growing up, we typically had Chinese sausage (dried, uncooked, Chinese spirit-flavoured) in the refrigerator drawer alongside dry Italian cheese, western-style cold cuts and Chinese dried fish. The other items that we bought yesterday, namely the cured duck, was a bit more of a rare sight. The preserved pork belly (I think they use a mixture of soy sauce as a base) was even rarer.

How do you prepare them? We did them in the rice cooker, while cooking rice. It seems like the typical way of preparing Chinese cured meats for the eating. You can either put them directly on the rice in the mid-stages of rice cooking, for extra flavouring (and fat all over the place), or just on a plate over the rice. It could probably work on a plate in a steamer too.

The sausages are cured, so could you eat them raw? I’m too used to eating them steamed to try, but some people do argue that they are cooked and edible, thus as good as eating those pepperoni sticks. :S 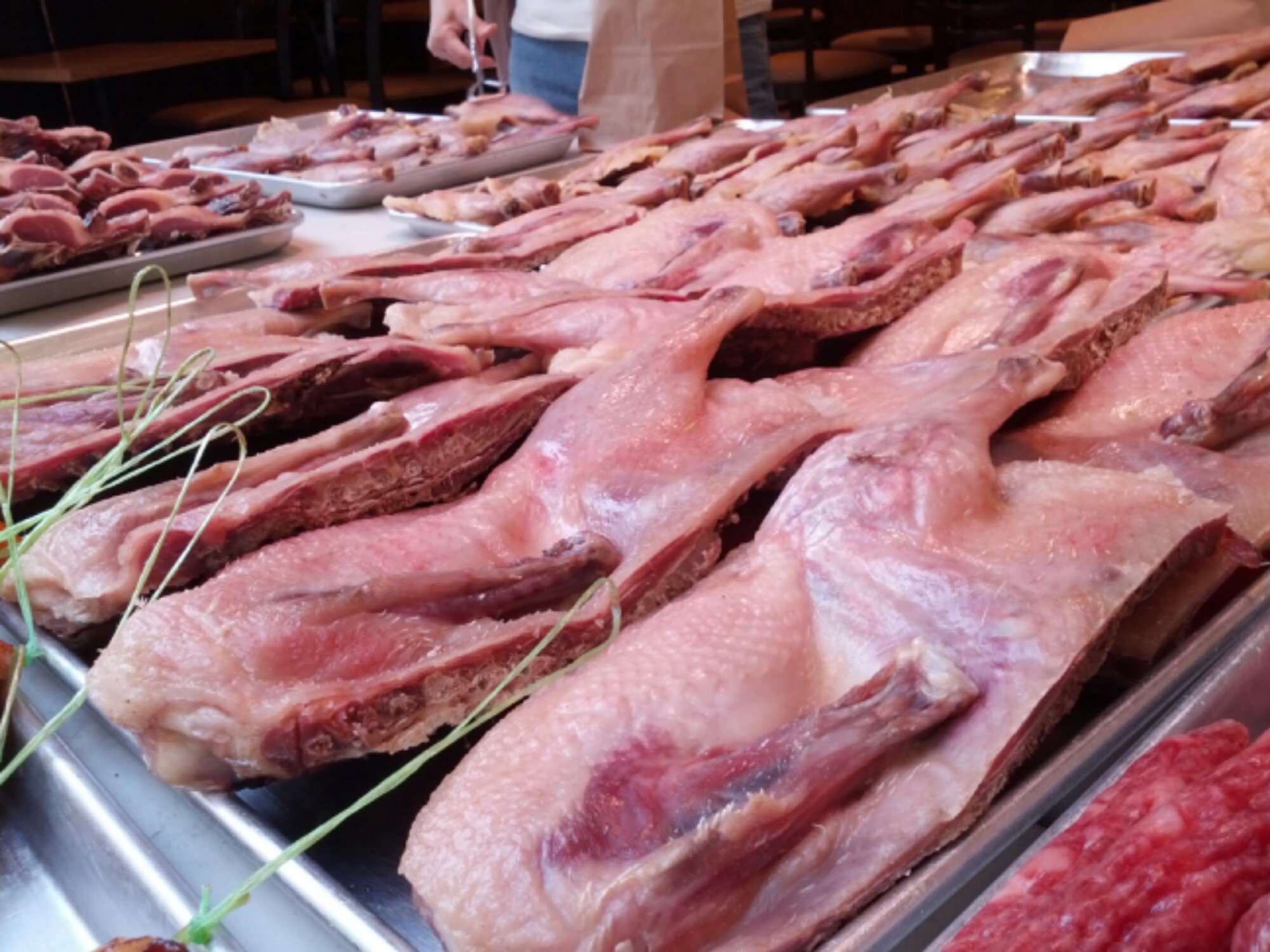 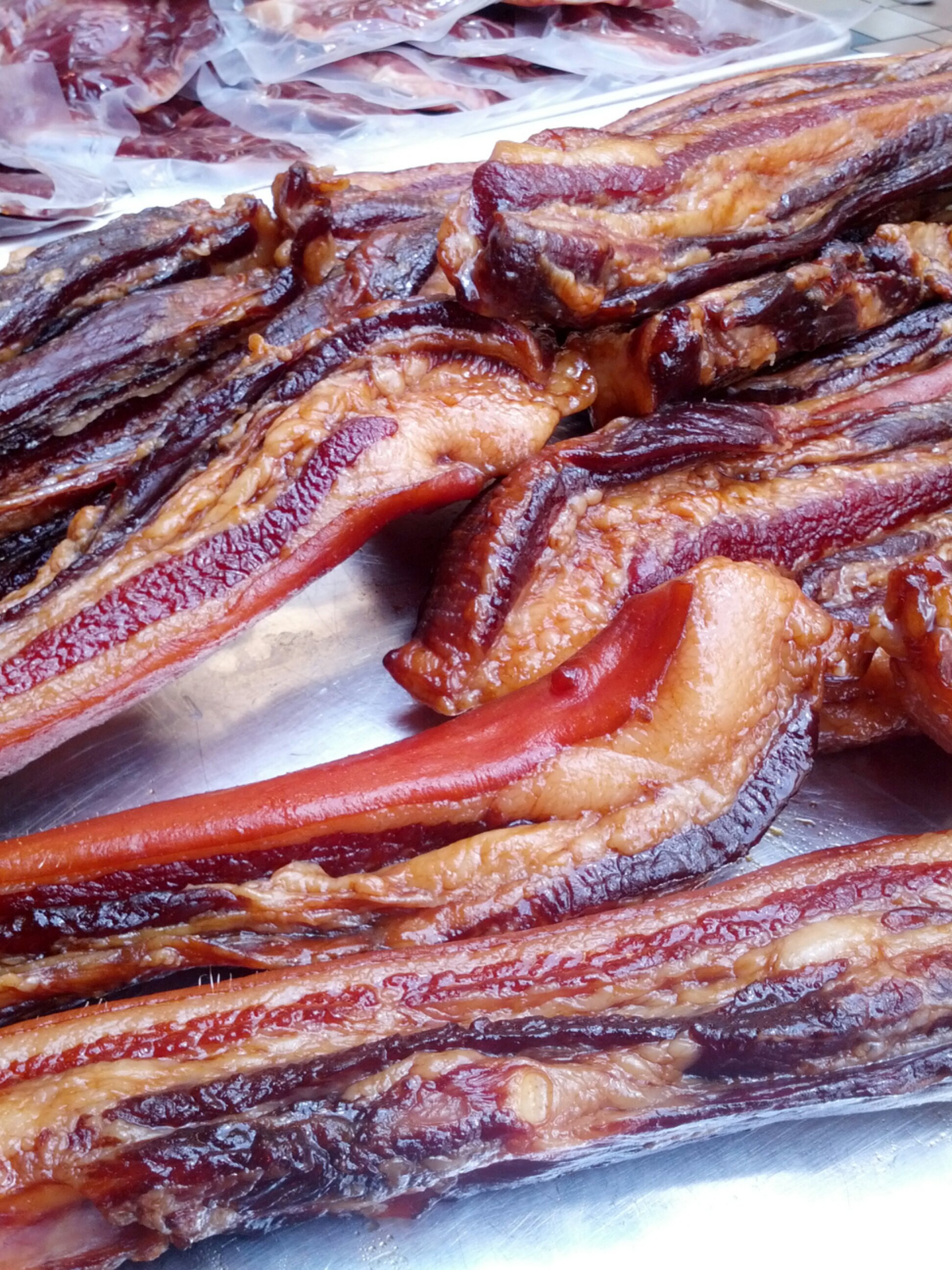 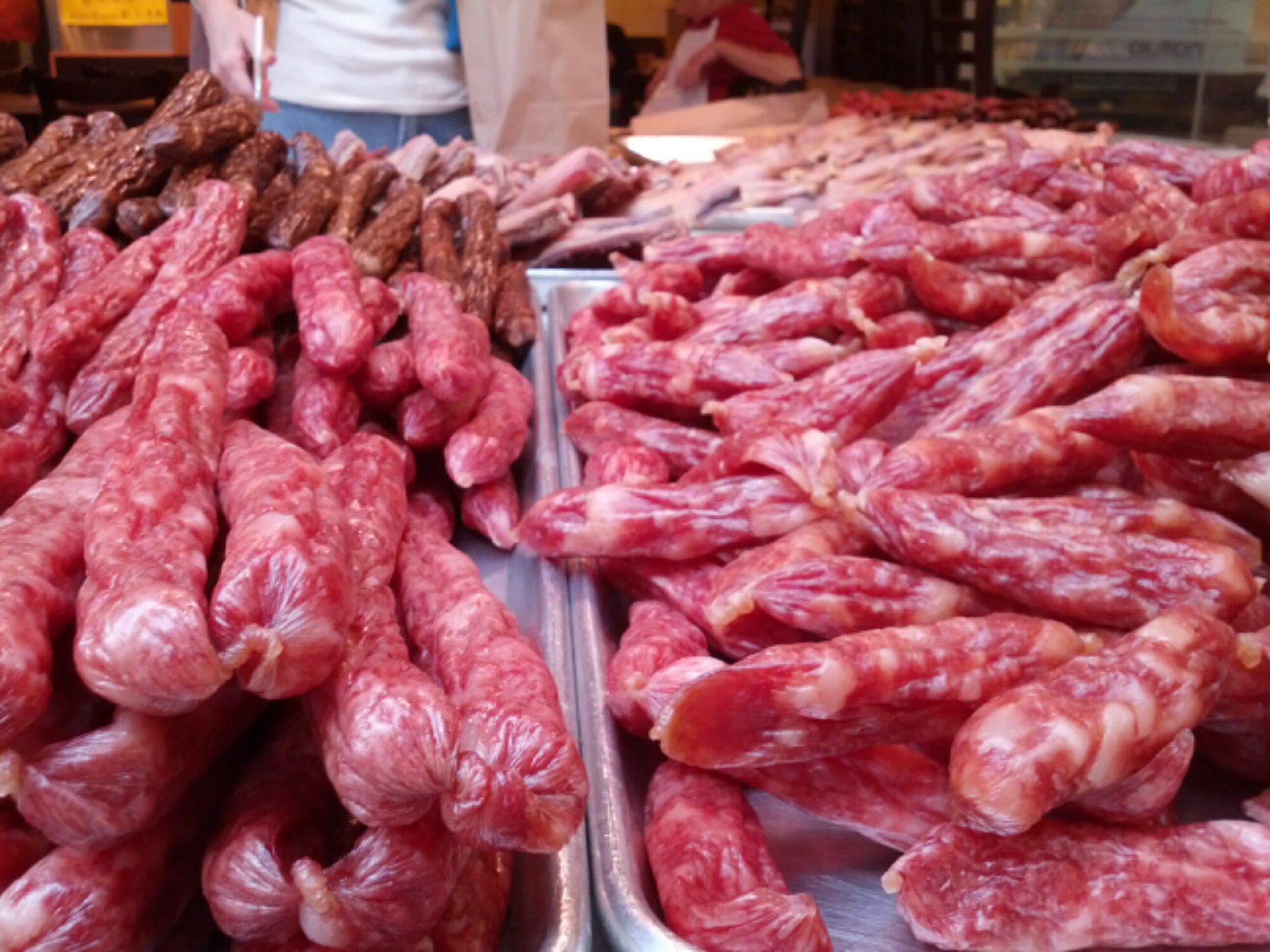